If Lynn Shepherd Cares About Writing, She Should Actually Read Books

I wanted to be an actress, but my parents said that I should go to college and get a degree in something useful.  So I majored in Creative Writing (take THAT!).  My favorite authors are Terry Pratchett and Tamora Pierce, but Brian Jacques’s Redwall series initially sparked my passion to write.  Needless to say, I was never interested in writing The Great American Novel.  I wanted to write about knights and magic and castles and fantasy, specifically YA (Young Adult) fantasy because that is what inspired me to become a writer.  I cannot TELL YOU the struggle I had in college because of this.  Teachers and students alike sneered at my “genre writing.”  It took me years to recover from the ego-beating I received in university writing classes from closed-minded assholes who claimed that writing about girls with swords wasn’t worthy of my page or their eyes.

I have since emerged from the Despairing Self-Pity Cave a fearless defender of YA.  Sherman Alexie, author of The Absolutely True Diary of a Part-Time Indian, wrote this brilliant article that sums up my feelings exactly about the importance of young adult fiction and the ignorance surrounding what it should be and who should write it.

This morning, I stumbled across this totally absurd piece entitled “If JK Rowling Cares About Writing, She Should Stop Doing It.”  I needed a rant, so I came here.

Lynn Shepherd, some writer who has not tasted the same success as JK Rowling, has decided that in order for the unknown authors of the world to get a fair shake, Rowling should step down from her tyrannical throne and let others have a chance, for Christ’s sake.  I mean, it was all well and good when Rowling was “Pottering about,” but now she’s strangling the adult book market with her crappy novels and no one else can even get a word in edgewise, so maybe she should just keep to writing for babies so that other authors can be published.

The premise alone is ridiculous, since that’s not actually how publishing works, but this line

is what makes my head explode:

“I did think it a shame that adults were reading [the Harry Potter books], mainly because there’s so many other books out there that are surely more stimulating for grown-up minds.”

So she has the audacity to judge readers for enjoying something that she has never read because she claims to be some sort of arbiter of what adults should and shouldn’t read. 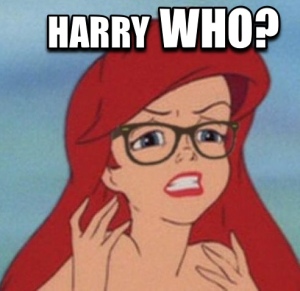 I thought Harry Potter was uncool before it was cool

It’s not breaking news that another snooty literary type thinks that any work labeled “children’s” or “young adult” is not worthy of adult consumption.  It’s just disappointing and tiresome.  Who the hell is anyone to say that it’s wrong for an adult to identify with Hermione or Alanna or Katniss any less than Elizabeth Bennett or Rosasharn or Lady MacBeth?

And if you say YA novels don’t use sophisticated prose, then I raise you the austerity of Hemingway as an example of powerful literature sans the fancy-pants and then hold up the maddening complexity of Joyce, who used all sorts of fancy literary devices and yet managed to make you want to kill yourself after having to untangle his sentences.

But children’s books are void of complex ideas, you say? The Butter Battle Book by Dr. Seuss.

But back to Shepherd, cus it gets better.

So I grudgingly read the rest of her article, in which she claims that it’s not sour grapes, even though it is, and then I looked through her other articles to see if she was just some troll wanting page hits.

I’m not saying that vampire books are bad.  I’m saying that if you’re going to be a condescending elitist about what is “stimulating” for “grown-up minds,” but you are currently working on some paranormal fiction based on Bram Stoker’s Dracula, mayhap you should take a moment to assess your glass house.

And yeah, I would say that boiling down Harry Potter to a children’s book is the same as boiling down Dracula to a vampire book.

Whilst reporting on a vampire festival she attended, she remarks headily (emphasis mine), “I was particularly interested in the literary programmes at the festival, and one of the best was a fascinating panel on the modern legacy of Stoker’s work, and how the sexual charge that simmers so close to the surface in the original novel influences contemporary books like Fifty Shades of Grey. ”

Okay.  Look.  I get it, that was the topic of a seminar that you attended, not your own thesis.  But I don’t see how you have the gall to say that 1) Harry Potter is a schlocky children’s series that adults shouldn’t read and 2) that Rowling’s pitiful foray into baby books disqualifies her from writing anything else AND THEN mention 50 Shades of Grey in passing as “a contemporary novel,” putting it on the same shelf as The Time Traveler’s Wife and The Story of Edgar Sawtelle.

You want to call YA infantile and not worthy of adult reading?  Well where is your elitist diatribe on how E.L. James cut and pasted a popular PARANORMAL TEEN ROMANCE novel?!  How can you spit on Harry Potter and its readers, but casually mention one of the biggest blemishes to contemporary fiction as if it’s worthy of literary analysis?  After all, to the deep shame of humanity, 50 Shades has sold more books than the Harry Potter series.

Lynn, I’m about to tell you something that is going to blow your mind.

That doesn’t mean that you’re not talented, that doesn’t mean that you don’t deserve success and money and fame and recognition for what you do.  Sometimes, despite all this, people just don’t give a shit about your art.  That is the cold hard truth.  If you truly believe in your work, even just a little bit (because, let’s face it, every artist spends about 80% of their time hating themselves), then someone else’s success, especially one in an entirely different genre than the one you write, shouldn’t diminish your work.  And, frankly, Charlaine Harris’s series (which adult readers, you know, your demographic, enjoy) is more in competition with your vampire book than Casual Vacancy.

Oh yeah, and, also, check your tone before you disparage young adult literature.  Cus Alanna the Lioness would DESTROY any stupid vampire character “for grown-up minds” you could ever come up with.

9 thoughts on “If Lynn Shepherd Cares About Writing, She Should Actually Read Books”

Must be doing something right